In the field of psychology the term forgetting curve describes how the ability of the brain to retain information decreases in time.

Hermann Ebbinghaus was the first to study the forgetting behavior in an experimental, scientific way. In his groundbreaking research he studied on himself the memorization and forgetting of nonsense three letter words. Examples of such words are KAF or WID. Words, which had a meaning or easily alluded to a known word were excluded. (See for more details Ebbinghaus memory experiments).

Ebbinghaus performed a series of tests on himself over various time periods. He then analyzed all his recorded data to find the exact shape of the forgetting curve. He found that forgetting is exponential in nature.

Ebbinghaus published his findings in 1885 in his book “Über das Gedächtnis (Memory: A Contribution to Experimental Psychology)”. 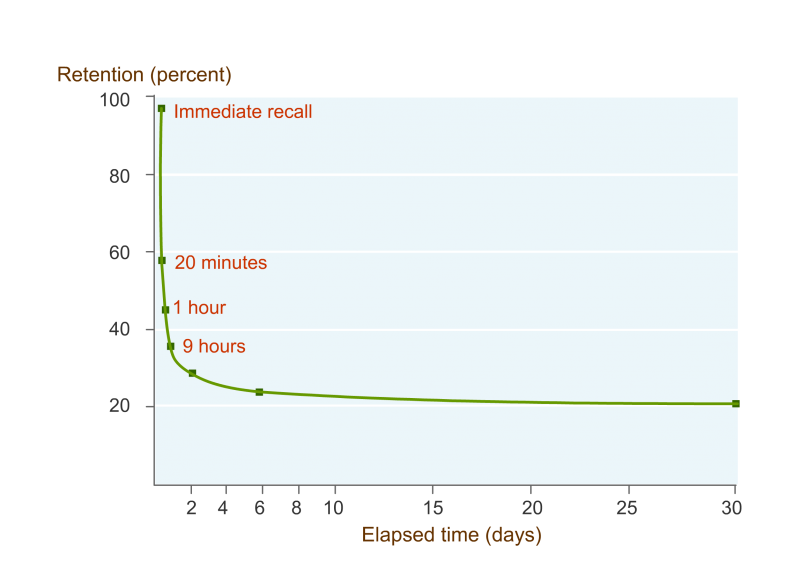 At the beginning your retention is 100% since this exactly the point in time when you actually learned the piece of information. As time goes on the retention drops sharply down to around 40% in the first couple of days.

The forgetting curve clearly shows that in the first period after learning or reviewing a piece of information we forget most!

The speed with which we forget any information depends on a number of different factors:

While all individuals differ in their capacity to learn and retain information the shape of the forgetting curve for base tests (such as nonsensical words) is nearly identical.

Thus the differences in learning capacities come from different acquired learning behaviors. Some individuals are able to transform the piece of information to a memory representation that is more suitable for them (for example audio oriented learners or visually oriented learners). Also some people have naturally a better capacity to use memory hooks and other mnemonic techniques to remember more easily and relate to information, which they know already.

However these techniques can be learned and applied by anybody.

What can you do to improve your memory?

The image shows what happens to the learning curve after your review the piece of information several times. Every time you repeat it your retention rate goes back to 100% since you just reviewed the information. And every time forgetting sets in in the very same way as if you learned the item only once. What is however drastically different is the speed at which you forget. As you can see in the image the forgetting curve becomes flatter and less steep with every additional review, provided the review is made at the correct time.

Learning from the forgetting curve – how not to learn

Typical cramming sessions in school, for example quickly learning vocabulary lists before a test are usually useless from a long term perspective. Most students don’t remember more than 10-20% after about half a week. The effort you made to learn these lists was in vain — you lost 80-90% of the learned material.

This site uses Akismet to reduce spam. Learn how your comment data is processed.